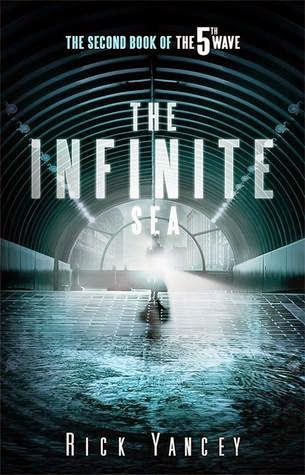 How do you rid the Earth of seven billion humans? Rid the humans of their humanity.

Surviving the first four waves was nearly impossible. Now Cassie Sullivan finds herself in a new world, a world in which the fundamental trust that binds us together is gone. As the 5th Wave rolls across the landscape, Cassie, Ben, and Ringer are forced to confront the Others’ ultimate goal: the extermination of the human race.

Cassie and her friends haven’t seen the depths to which the Others will sink, nor have the Others seen the heights to which humanity will rise, in the ultimate battle between life and death, hope and despair, love and hate.

Exams are finally over Wahooo!!! Before I couldn't post as often as I wanted to, but I'm back so yay :P

First off, This book is ONLY 300 PAGES. I don't know why this came as a shock to me, I was so sad because I want more... The 5th Wave was 457 pages so there's quite a difference between them.

There's not much I can say about this book without spoiling Y'all, so this review will be very brief and small.

So if you read my 5th Wave review, you would know that I LOVE that book. I gave The 5th Wave a 5/5 stars.
For the Infinite sea, I couldn't get into it as much, It took me a good week and a half to read this book - unlike the 5th Wave which I read in 3 days.

In my opinion; the action only starts after the 1st half of the book. I found the start quite boring and dull, not much happened.
So apart from the crappy starting, the end was super intense and I cannot wait to read the next book in the series! :P
I gave this book a 4/5 stars.

Sorry for the really short review but I definitely recommend this series to any Young Adult fans!!

Happy Reading Everyone!
Chelsea :P
Posted by Unknown at 11:06 PM